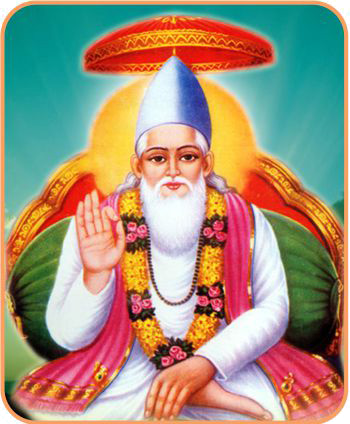 A gadfly to the unthinking orthodox among Hindus and Muslims, Satguru Kabir was a darling of the truly devout of both the communities who, on his passing away, claimed his body which was miraculously turned into flowers with each party claiming a portion.

A Hindu child brought up by a Muslim weaver Niru and his wife Nima, Satguru Kabir sought to break the barriers between Hinduism and Islam by going into the heart of religion. He was more than convinced that when it comes to any scripture, "the letter killeth" and that the so-called pandits and Maulavis who miss the "spirit" unwittingly turn themselves into hate merchants.

Even as Socrates in his times tried to expose the ignorance of the sophists and earned their wrath, Satguru Kabir who lived from 1440 to 1518 AD exposed the follies of the divines who swore by text books and survived many attempts on his life.

In his time, Arabic and Sanskrit were the chief languages of religion and the masses knew little of them. Kabir's dictum was: `Few men are qualified to become scholars but all are required to be good. Hence association with the good, Satsang, is a positive way of forging good character than learning by heart scriptural passages without having any idea of their real import.

Kabir's spiritual urge manifested itself even when he was a boy and it was by using a stratagem that he managed to get initiated in "Rama" mantra by the great saint Ramananda who eventually declared him as the dearest of his disciples.

It is said that Satgurr Kabir, in the pre-dawn hours, stretched himself on the steps of a bathing ghat in Ganga where Ramananda had his bath every day. On realising that he had unwittingly stepped on the body of someone, Ramananda uttered "Rama, Rama," which became for Kabir the sacred mantra.

It is said that Satguru Kabir, in the pre-dawn hours, stretched himself on the steps of a bathing ghat in Ganga where Ramananda had his bath every day. On realising that he had unwittingly stepped on the body of someone, Ramananda uttered "Rama, Rama," which became for Kabir the sacred mantra.

Ramananda was taken to task for initiating Satguru Kabir by both orthodox Muslims and Hindus but when Ramananda understood Kabir's depth of sincerity he embraced him and prophesied that he would make a mark in his life. From then on it was a triumphant spiritual ascent for Kabir who ranks high among the religious reformers India has ever produced. In his own time, Guru Nanank, Dadu and several other spiritual leaders acknowledged Kabir's greatness and in later times, Rabindranath Tagore is among the literary giants who have sought to spread Satguru Kabir's message.

There are well-known Satguru Kabir Panthis with followers from among Hindus and Muslims like Garibdass Panth from Haryana and Bhuriwale from Punjab.

The details of Kabir's life are mixed with legends - some say he married one Loi and brought up two adopted children Kamal and Kamali, that Emperor Sikandar Lodi, angered by Kabir's refusal to salute him tried to get him killed by drowning, burning and other means of torture before finally acknowledging Kabir's greatness.

One thing is certain. Kabir's precious teachings are a legacy of the nation and will continue to inspire those who seek the kernel of religion and not the husk. Satguru Kabir is said to have given up his body at Maghar in Gorakhpur District at the ripe old age of 78.

To associate with a Sadhu is like sitting near a seller of perfumes; though he does not sell you anything, you still enjoy the perfume.
- Satguru Kabir Sahib

No act of devotion can equal truth; no crime is so heinous as falsehood; in the heart where truth abides there is God's abode.